For those who like surprises, the stock markets have not disappointed in 2020. The S&P 500 surged to new heights despite the economy-clenching COVID-19 pandemic powering around the globe, and individual investors’ participation in trading reached a 10-year high during the first half of this ye.... More »

Don’t have all your investment eggs in one basket, advises Clever Girl Finance author Bola Sokunbi, who emphasizes the importance of diversifying..... More »

It’s becoming increasingly likely that the economic recovery from COVID-19 will be long and drawn out, which is not good considering that 3 million have been laid off over the last two months. Since the crisis began in Canada, MoneySense has been telling readers to hang tight with their portfolio .... More »

Trading stocks is a great way to earn extra money from anywhere in the world. Thanks to the advancement of technology, it has never been easier to track your investments and make quick decisions, even without a broker. Keep reading to learn more about the advantages of trading without a broker, how .... More »

Making sense of the markets this week: September 14 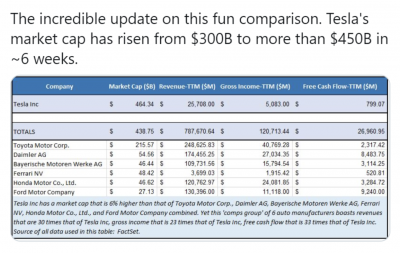 Each week, Cut the Crap Investing founder Dale Roberts shares financial headlines and offers context for Canadian investors.
Tesla snubbed by the S&P 500, and now it’s getting hit on all sides
What a difference a week can make.
In last week’s column, we discussed how Tesla’s valuation was enough to buy six major global automakers. Dan Hallet of Highview Financial Group tweeted:
Source: Twitter
And now? Tesla’s stock was down nearly 35% from last Tuesday, Sept. 1, to Thursday, Sept. 10. In addition, the electric carmaker also created a massive number of new shares, reducing the percentage of ownership of the company for current shareholders. On Sept. 1, Tesla announced plans to sell up to about $5 billion in new shares. That cut the price of each share by one-fifth. On September 8, Tesla announced it had completed that sale.
The electric carmaker is getting hit on all sides. In addition to the valuation fears, it’s soon to face competition: GM has teamed up with Nikola Corporation with a plan to create electric-powered pickup trucks…

10 strategies to help you pay off your credit card

Credit cards have become ubiquitous, used to pay for everything from gas to travel to home delivery. Managed properly, they’re also essential financial tools, allowing cardholders to build credit, earn cash back or travel points, and gain valuable perks, like insurance or purchase protection. Carrying a balance, however, changes everything. “Credit card debt is very high-interest debt, typically in the neighbourhood of 20% or more,” says Scott Hannah, president and CEO of Credit Counselling Society. At that rate, even a modest balance can spiral quickly out of control.
If you’re holding a balance on your credit card, paying it off is task number one, so you can once again enjoy its benefits. Here are 10 solid tips to help you get to a $0 balance, faster.
1. Examine your spending habits
It might seem obvious, but you can’t improve on something if you don’t understand it.  “Typically, when someone comes to us looking for help, our first goal is to look at their expenditures and balance their budget,” says Hannah…

Stay tuned for more Investment wisdom brought to you by banks.ca!