Home / Investment / The right way to sell stocks during COVID-19 + MORE Sep 18th
All about Canadian investments. Learn the ins and outs and get the latest news.
Latest News

You’ve probably heard many good things about cryptocurrency; how people reaped good returns after Bitcoin’s unit price skyrocketed. You want in on the virtual currency gravy train and have some extra cash to spare for this venture. But maybe you’re a bit hesitant. Unlike traditional in.... More »

What investors need to know about Canada Sep 20th

I will bet there’s not one Canadian (aside from Nordic sports enthusiasts, perhaps) who is excited about the coming winter. With COVID-19 cases rising, the real possibility of more lockdowns ahead and no warm-climate winter vacations to look forward to, the next few months are going to be long and.... More »

Saving for university isn’t always top of mind when you’re a busy new parent, knee-deep in diapers. Add the steep cost of daycare along with the stress of trying to juggle work and toddlerhood, and setting aside funds for your child’s post-secondary education can feel like an insurmountabl.... More »

Real estate during COVID-19: to invest or not to invest?

It goes without saying that COVID-19 has had an unprecedented and far reaching effect on the Canadian economy. With record unemployment and job uncertainty being a reality for many, it can be tough to find the silver lining. However, it’s important to remember that in times of fear and uncertainty, there is also opportunity. Let’s look at how that applies to real estate investments—whether that involves renovating a suite in your home or purchasing a separate property to generate rental income, or other property-backed investments.
Is now a good time to invest in real estate?
I’ve always said that when times are good you make money on equity, and when times are bad you make money on financing.  At this moment, several months into the pandemic, there is a possibility for both. House prices are holding steady and financing costs are low, which is an almost unheard-of situation. The way I see it, this is a gift from the real estate gods.
Keep in mind, though, that this can, and likely will, change…

The right way to sell stocks during COVID-19

It’s becoming increasingly likely that the economic recovery from COVID-19 will be long and drawn out, which is not good considering that 3 million have been laid off over the last two months. Since the crisis began in Canada, MoneySense has been telling readers to hang tight with their portfolio holdings and not sell, and that’s been good advice—the S&P/TSX Composite Index is up 44.7% since March 23, while the S&P 500 has climbed by 50%.
While we still think people should stay invested, rebalance their portfolios and continue to save, knowing how difficult things may be financially for people over the next few months, there may come a time when you need to trade in your stocks for cash; though it’s great to have government programs like the Canada Emergency Response Benefit, for many people, the $2,000-a-month payment won’t be enough to make ends meet.
Selling stock isn’t as simple as it may seem. Just like you wouldn’t (or shouldn’t) buy stocks in an indiscriminate way, you don’t want to dump a bunch of companies without some idea of what it is you want to sell…

Making sense of the markets this week: September 21 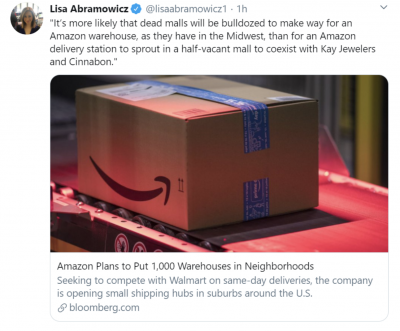 Each week, Cut the Crap Investing founder Dale Roberts shares financial headlines and offers context for Canadian investors.
Perhaps we’ll all work for Amazon one day
One of the economic casualties of COVID-19 has been the mall while, at the same time, online shopping went through the Amazon warehouse roof. So his tweet more than caught my eye. Is the phrase “It’s more likely that dead malls will be bulldozed” a prognostication or an exaggeration?
Source: Twitter
Perhaps the bulldozing of malls is not such a ridiculous notion. As noted in a Seeking Alpha post, Amazon “already had to hire 175,000 people earlier this year to keep up with the rush of orders, and last week said it had 33,000 corporate and tech jobs it needed to fill.”
One could argue that no company was better-positioned for the pandemic than Amazon. Now the corporation is hiring another 100,000 workers in North America, and plans to open 1,000 small delivery hubs in cities and suburbs all over the U.S.
It stands to reason that if consumers are shopping online more often, they’re not hitting the malls…

Getting a return on your investment within Canada can be tricky – let us help! Visit our Investment page for the latest advice and articles.