Retired? No mortgage for you: How the stress test is making it tougher to borrow later in life Nov 6th

Many people are shocked to discover that the amount they can borrow decreases drastically when they retire because the stress test looks at your income..... More »

The head of the Canada Mortgage and Housing Corporation delivered a particularly gloomy forecast while testifying remotely before the House of Commons Finance Committee on Tuesday. Among those predictions, CMHC CEO Evan Siddall said: Home prices could fall from their peak by 9% to 18% over the next .... More »

Canada’s big banks announced this week that those struggling due to the COVID-19 crisis will be able to defer their mortgage payments for up to six months. The coordinated announcement came from the Bank of Montreal, CIBC, National Bank of Canada, RBC Royal Bank, Scotiabank and TD Bank, and will b.... More »

It’s not too early to be thinking about New Year’s resolutions. And since you’re promoting yourself and building business, more efficient marketing is probably on your wishlist for next year. Why not resolve to market yourself more efficiently in 2020? Marketing is a full-time job. Since you a.... More »

44 Percent of Canadians Overspend on Rent 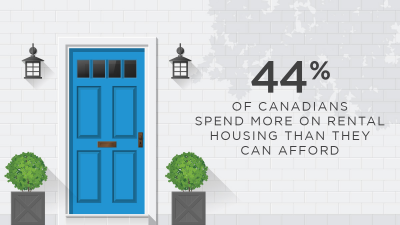 Looking Forward
Two thirds of the people who responded said they intend to purchase a new home in the near future, and among those, it was again renters who feel they’ll need to stretch their budget to afford a suitable home…

Getting a great mortgage in Canada can be tricky – let us help! Visit our Canadian Mortgage page for the latest rates and articles.