Home / Mortgages / “Is it better to pay down our mortgage or ramp up contributions to our teen’s RESP?” + MORE Nov 30th
Canadian housing mortgage rates are all over the map. Don’t get trapped in an unnecessarily costly mortgage agreement.
Latest News

You’re two years into your mortgage term. You’ve got a great rate, or so you thought? But now you aren’t sure. With so much talk about record low interest rates, you begin to question. Maybe there’s a better deal out there? Did you choose the right product and lender? Has you.... More »

While mortgage rates have been tumbling steadily over the last couple of months, many are now in record-setting territory, with certain 1- to 5-year fixed rates now available for under 2.00% from discount brokers. Concerns over a second wave of COVID-19 have caused Canada’s 5-year bond yield t.... More »

For the second-quarter earnings season, all eyes were on the Big 6 banks’ credit loss provisions and mortgage payment deferral programs. With the onslaught of COVID-19, the banks granted payment deferrals to more than 700,000 Canadians to help prevent a wave of defaults. In their second-quarte.... More »

Mortgage Professionals Canada has released its latest State of the Mortgage Market report today, which is chock full of new stats and insights into the Canadian mortgage market. Despite regular headlines about rising home prices and overvaluation in the country’s largest centres, the report fi.... More » 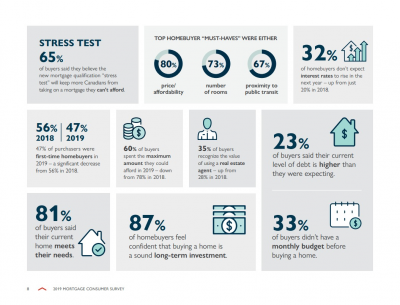 Canada Mortgage and Housing Corporation released The State of Homebuying in Canada report on November 15, 2019, with a few key findings, including this headline.

The annual State of Homebuying in Canada report noted that 56% of all purchasers were first time buyers in 2018. This dropped to 47% in 2019.

The tightening of mortgage rules which has been taking place over the last 4 years is certainly having an effect. The never ending rule changes were intended to slow home sales and prices. But like most government interventions, its had the opposite effect.

Fewer first time home buyers are now able to qualify. They aren’t alone. Private investors, or people owning a second or third property, are also finding it much more difficult to qualify for a mortgage.

The end result is fewer rental units available and record high rents. Canadians are motivated to buy but cannot qualify. They also cannot afford to rent because, in most cases, monthly rents are higher than a mortgage payment…

Debt on the Minds of Canadians

Debt is hanging over the heads of a growing number of Canadians, with two in five saying they don’t expect to get out of debt in their lifetime. But mortgages—typically the largest debt of all—are the least of their worries. A new survey from Manulife Bank confirms concerns over the growing non-mortgage debt loads of […]

How to keep your holiday spending in check

According to Equifax Canada data, there was a 1.9% rise in total debt per consumer at the end of the second quarter in 2019. Unsurprisingly, a recent survey commissioned by Equifax also found that 55% of Canadians say they’ll be spending less on holiday gifts this year. Hmm, I wonder why that is?
It’s no secret that people across the country are struggling with balancing their debts, paying their bills on time and trying to save for emergencies or retirement. As a financial counsellor who works with individuals to improve their financial situations, I see all the time how the struggle is real. But saying that you plan on spending less this holiday season and actually putting your money where your mouth is are two very different things. Not only that, if you don’t start taking steps to improve your finances right now, you won’t just be forced to cut your holiday spending this year. You may also be affecting some big financial goals you’ve got for the future—like being approved for a mortgage so you can finally become a homeowner…

“Is it better to pay down our mortgage or ramp up contributions to our teen’s RESP?”

Q. My husband and I, both in our early 40s, bought a house in Toronto four years ago. Since then, our variable rate mortgage has gone up four times and is now at 3.2%.
We have managed to pay down $150,000 of our mortgage in those four years with the extra bi-weekly payments and have $260,000 remaining. My husband would like to stop the extra payments and instead use that money to put towards a Registered Education Savings Plan (RESP) as his son heads to university in four years. I think the money is better spent on paying down the mortgage, which, at our current rate, would be fully paid off in six years, freeing up a lot of cash flow to assist with university costs; I’m also thinking we could take out a Home Equity Line of Credit (HELOC) at that time, if necessary. As interest rates keep rising I think getting the mortgage paid off as quickly as possible is the best choice. What are your thoughts?
–Caitlin
A. Caitlin, you and your husband have been diligently paying down your mortgage with amazing speed…

Despite challenging government regulations in recent years, the mortgage industry is showing strength like it hasn’t in a long time. That’s the assessment from some of Canada’s top lender heads who participated in the lender panel at this year’s national mortgage conference in Toronto. But they also warn that more headwinds are coming…and likely not […]

Not sure what the best mortgage rates in Canada are? Be sure to get the best rates possible – Visit our Mortgage page for details.